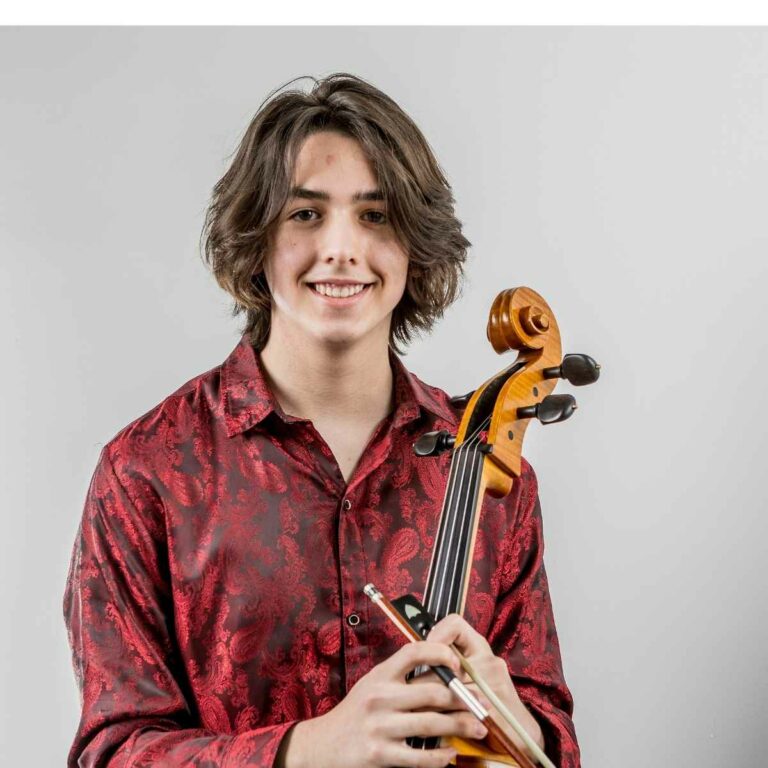 Ari Webb (age 16) is a Venezuelan-American cellist from Cincinnati, Ohio. He made his solo debut at Carnegie Hall after winning the AFA International String Competition at age 6 and the American Protégé International String Competition at age 8. He also performed at the Stern Auditorium in Carnegie Hall in 2017 as part of the Peraza Music Workshop Ensemble. A 2022 YoungArts Winner, Ari is the first chair of the Cincinnati Symphony Youth Orchestra (CSYO) and also of the Wyoming High School Philharmonia Orchestra. He is also part of the CSO Noveau Chamber Players and the Peraza Music Workshop Ensemble. Ari made his orchestra solo debut at age 12 with the Blue Ash-Montgomery Symphony Orchestra under maestro Michael Chertok as 1st Place Winner Junior Division of the 2018 Jack and Lucille Wonnell Young Artists Concerto Competition. He also performed at the BOP STOP at The Music Settlement and the Judson Manor in Cleveland as 1st Place Winner of the 2018 and 2020 of the Cleveland Cello Society Scholarship Competition. Ari made his international solo debut in April 2019 at the Amphithéatre Phillharmonie in Paris after winning 1st place at the International Music Competition “Grand Prize Virtuoso”. He is also the 2019 State of Ohio Winner of the MTNA- Yamaha Orchestral Strings Junior Competition and the National Mary Alice Cox Award, Senior Division. Ari also was the winner of the 2018 OFMC Marylin Walters State Competition. In 2021, Ari won the State of Ohio Buckeye Auditions and was selected to perform in the NPR Radio Show From The Top in a performance with artists Tessa Lark and Peter Dugan. He is a winner of the Cincinnati Symphony Youth Orchestra Concerto Competition and will perform with the Cincinnati Symphony Youth Orchestra in the Spring of 2022. Most recently, Ari was selected as a semifinalist for the 2022 Ysaye International Music Competition. In the summer of 2018, Ari earned a full scholarship to attend the Interlochen Arts Academy. He has also attended summer institutes such as the Cincinnati Young Artists, Green Mountain Chamber Music Festival and the Heifetz Institute. Ari has studied with renowned teachers such as Lawrence Lesser (NEC), Hans Jørgen Jensen (Northwestern University) , Steven Doane (Eastman School of Music), Joel Krosnick (Juilliard), Richard Aaron (Juilliard), Clara Kim (Juilliard), among others. Ari Webb began playing cello at age 3 with Helen Ford at Indiana University. He studies with Alan Rafferty and Dr. Sarah Kim. Ari loves to play chamber music, piano and play video games with his brother Eli and his friends.