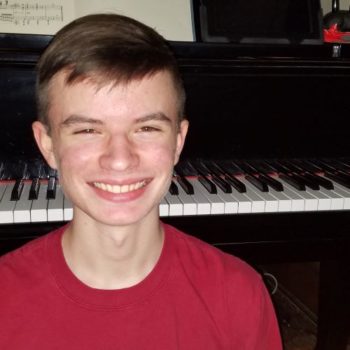 Alexander Van Bibber (Alex), is 16 years old and a sophomore at Columbus Alternative High School.  He has been playing the piano for 12.5 years.  Alex began winning local, state, and international competitions at the age of 7.  At 9, he performed his first piano concerto with orchestra, having won the Suzuki Association of the Americas concerto competition.  Alex performed a solo at Carnegie Hall in 2014 and collaborated with an artist for the TedX Columbus convention in 2015.  In middle school, Alex studied at Ohio State University as a piano student through College Credit Plus, competing, sitting juries, and taking music classes.  Now in high school, he enjoys the academic challenge of advanced math, science, and language classes in addition to his hours spent at the piano.  Alex has had the privilege to study with many excellent teachers over the years:  Mary Craig Powell, Tianshu Wang, Steven Glaser and currently, Nina Polonsky.  Alex is the oldest of four, having 2 younger brothers and a little sister.  In addition to spending time with his family, Alex enjoys reading, folding complex origami, and video game speed runs.