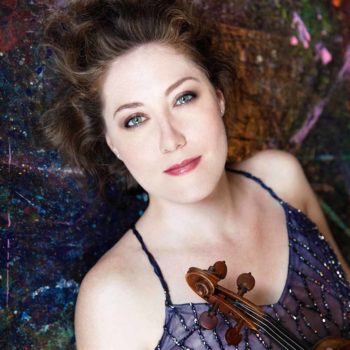 American violinist Joanna Frankel consistently garners worldwide acclaim for her technical prowess, her artistic sensitivity, and her captivating performances of the classical repertory’s most challenging masterpieces. Hailed as “formidable,” in Palm Beach, “riveting” in South Africa, “heartfelt” in The Netherlands, and “dazzling” in Columbus, she has toured as a soloist and chamber musician across the United States, Europe, Africa, and the Middle East. Most recently, she was given the opportunity to perform as soloist with The Columbus Symphony on Niccolo Paganini’s own 1743 ‘Il Cannone’ Guarneri violin, which was flown to Columbus from Genoa, Italy for the rare occasion.

Proficient on the viola as well as on the violin, Ms. Frankel embodies an honest love of chamber music and is consistently engaged to perform at a large variety of music festivals, which have included The Marlboro Music Festival, The Johannesburg Mozart Festival, Festspiele Mecklenburg-Vorpommern, Centro Cultural Internacional Óscar Niemeyer, La Jolla’s SummerFest, Santa Fe New Music, The Aspen Music Festival’s summer and winter seasons, The Spoleto Festival USA, and The International Holland Music Sessions.  From 2008-2012 Ms. Frankel joined Kean University as a member of its Concert Artist Faculty in violin and viola, and in 2013 she became a founding member and first violinist of the KwaZulu-Natal Philharmonic Principal String Quartet.

Born in Philadelphia in 1982, Ms. Frankel began her violin studies at age three with The Suzuki Method, and at age seven continued in the Russian tradition with mentors Edwin Grzesnikowski, Jascha Brodsky, Choong-Jin Chang and Robert Chen. She then trained for six years at The Juilliard School in New York City, a pupil of Masao Kawasaki and Cho-Liang Lin, and received the school’s prestigious ‘William Schuman Prize for Outstanding Artistic Excellence and Leadership’ upon graduation. Her post-graduate work continued at Carnegie Hall, where she was selected as part of the inaugural class of “Ensemble Connect,” the Hall’s groundbreaking initiative that trains ambitious young musicians to be 21st century arts leaders. From 2013-2016, Ms. Frankel resided in Durban, South Africa after being appointed First Concertmaster of The KwaZulu-Natal Philharmonic. Ms. Frankel currently makes her home in Columbus, Ohio, where she serves as Concertmaster of the Columbus Symphony under the artistic direction of Rossen Milanov.

From 2009 until 2016 Ms. Frankel performed on the 1846 Jean Baptiste Vuillaume violin labeled ‘Joseph Guarnerius fecit Cremonae,’ on extended loan from a generous patron through the Rachel Elizabeth Barton Foundation in Chicago; she currently plays her own Gaetano Vinaccia violin, crafted in Naples in 1819, and a custom-made Robert Brode viola, built especially for her in 2001.