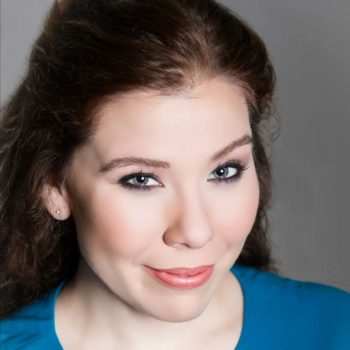 Praised for her unique timbre and engaging performances, Raphaella Medina has made appearances in opera, concert, musical theater, and theater throughout the United States. In the 2018/19 season, Medina made her debut with BARN Opera as Rosina in Il barbiere di Siviglia, originated the roles of Shop Woman and Mrs. Leak in the world premiere of Lolly Willowes (MATCH, Houston), debuted as a soloist with the Simpson University Symphony and the Paradise Symphony, co-wrote and premiered a devised theater work, SMALL UMBRELLAS, and made her television debut as Isabella in Shakespeare’s Measure for Measure with Spiritus Productions/KIXE Channel 9 in collaboration with the PBS documentary series, Shakespeare Uncovered. Additionally, Medina was named a San Francisco District Winner and a Western Region Finalist in the 2018/19 Metropolitan Opera National Council auditions.  Previous season highlights include Medina’s role and house debut as Zweite Dame in Die Zauberflöte with Opera in the Heights (2017), originating the role of Oldest Daughter in the world premiere of The Woman of Salt (2017), singing the title role in The Ugly Duckling with Opera Saratoga (2018), and being announced the winner of Mobile Opera’s Madame Rose Palmai-Tenser Competition (2018).

An avid performer of new and contemporary music, Medina has premiered operas and vocal works of composers from across the country. She also frequently programs 20th and 21st century works by American composers. Recent performances include the notoriously difficult Madrigals: Book I (Crumb), as well as the song cycles Recuerdo (Musto) and Casa Guidi (Argento). Medina has performed roles with Opera in the Heights, BARN Opera, Opera Saratoga, Seagle Music Colony, Moores Opera Center, and the FSU Opera. Notable performances include Rosina, Stéphano, Dorabella, Dolly Oblonsky (Anna Karenina), Zerlina, and Isabela (La hija de Rappaccini). Medina is also active in the broader operatic community. In collaboration with the Weill Music Institute at Carnegie Hall, Medina has participated in master classes for young singers led by Joyce DiDonato which were broadcast internationally by Medici.tv. She has also participated in Marilyn Horne’s Carnegie Hall master class series The Song Continues and has appeared in recital with Stephanie Blythe. Medina holds a Master of Music from the Moores School of Music at the University of Houston. She completed her undergraduate studies at the Florida State University College of Music.